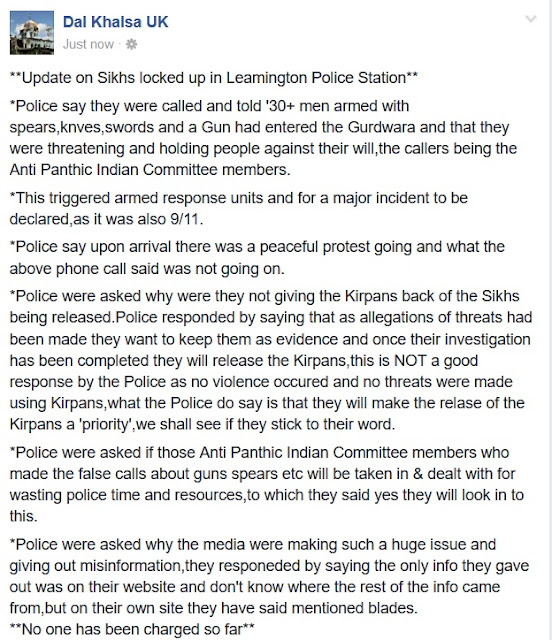 Today's media over reaction and bias regarding the peaceful protest by Sikhs at Leamington Gurdwara Sahib is outragous to say the least.

Headlines such as ''Sword-Wielding Gang' Storm Sikh Temple In Leamington Spa' 'Men with blades' & they had 'knives' were all peddled on the BBC,Sky,The Mirror,Metro and a whole host of copy paste news papers.

Lets first of all be CLEAR the knives,blades,swords they are refering to are 'Kirpans' one of the 5 articles of faith worn by Sikhs.UK law gives exemption to the Kirpan as an article of faith and legally Sikhs have the right to wear one.

So the media's dramatic headlines and over exaggerated sensastionalismm fall flat on their face.Walk in to any Sikh Gurdwara today in the UK or indeed the world and they will find Men,Women & Children with Kirpans.It is not 'shocking' or something new,which is what the media are implying by stirring up a storm in a tea cup.

The sit downpeaceful protest was carried out against the corrupt management of the Gurdwara who are not adhering to the 'Sikh Code of Conduct' - the Sikh Rehit Maryada.Many Gurdwara Committees do not adhere to the Sikh Rehit Maryada on many issues just to make financial profit.This blatant act of breaking the rules to make money has angered the Sikh Community for many years,leading to many such protests.Corrupt Gurdwara Committees break the code of conduct on issues such as mixed marriages,where the code of conduct states that only two Sikhs can take part in the Sikh Ceremony the Anand Karaj,just like only a Catholic or Muslim can take part in the their respective ceremonies.WE MAKE CLEAR that if two people want to get married and one happens to be a non Sikh they should get a civil marriage or get married elsewhere,they should not try and collude with corrupt committees to try and get an Anand Karaj arranged.The Sikh Supreme authority Sri Akal Takht Sahib,Amritsar,Panjab has also reinforced this rule in the code of conduct that only two Sikhs can take part in the Anand Karaj,yet the media does not mention this.

Other issues in regards to the code of conduct include the use of 'party halls' on Gurdwara premises.A handful of Gurdwaras in the UK namely Ramgharia Sabha,Leamington Spa and others wish to build and operate these party halls in order to make financial gain at the expenese of breaking the code of conduct.As we know intoxicants are prohibited on Gurdwara land and none of the Gurdwaras funds should be used for such purposes,they should only be used to advance the development of the Gurdwara,Preaching and in services for the Sikh Community as a whole,not for having on site nightclubs which break even the rules of the Gurdwaras own constitutions as per the charity commission.

Not only this but so called 'Sikh Temples' such as the Ramgahria Sabhas which run on a caste only membership regularaly allow 'Durga Pooja' at these halls owned by the Gurdwara,where the hall is used by Hindu Groups for the worship of Hindu dieties.This is also in direct conflict with the Sikh Code of Conduct which prohibits non Sikh rituals and such acts on Gurdwara land or any building affiliated with it.The Hindu Swayamsevak Sangh (HSS) linked groups who use these halls and the Ramgarhia Council UK who give them the halls to use are all guilty of breaking the Rehit Maryada.Notably the HSS is the UK wing of the Hindu Fascist RSS terror group in India which is hell bent on attacking the core principals of Sikhi.Their active links with caste based Gurdwaras such as the Ramgarhia Sabhas,Ravidassia Sabhas is open for all to see across the UK.

There was no need for the Police to make such a scene with sharpshooters and armed response units,they should have properly assessed the situation before sending such force in which made it look like an anti terror operation even though they have now stated it was NOT one.

The ignorance of the corrupt committee can be seen in the quote below:


Mr Birdi said: "There have been tensions that have been going on for a couple of years with some people objecting to mixed marriages in taking place in the gurdwara.
"The general consensus is people are respectful of mixed marriages if the traditions are respected.
"Nothing has happened on this level before.
"This is meant to be one of the happiest moments of somebody's life - it shows a lack of respect."

This ignorant clown ignores the fact of what the Sikh Rehit Maryada is and instead of talking about respecting the rules and sentiments of the Sikhs,he goes on about people being respectful of mixed marriages.If that was the case the Sikh Supreme authority would not have had the need to reinforce the Sikh Rehit Maryada with edict after edict to make the ignorant undertand that only two Sikhs can have an Anand Karaj if one is a non Sikh they can do what they like and have a court marriage.

Alcoholics & drug addict committee members such as Mr Birdi must have really been high on their own stuff when they called for an armed response,he might of even asked for military assitance we believe he should be sent to a mental institution and tested for drug taking.They have mis-used the emergency services in at a time when armed response units are streched due to the hightened terror alert across Europe.

Many peaceful protets have taken out by Sikhs but we have never heared of armed Police turning up not even in Central London,where Kirpans were also present.On this occasion the reaction by the Police seems to be one of believing false reports and then sending full force in.Those who gave the false reports should now be charged for wasting police time as where ever a Sikh is a Kirpan is bound to be nearby and that too legally!

All in all it seems that due to corrupt committee members the media have jumped on this issue in order to sensationalise the news and get more hits on their websites & feeds.A Kirpan is not a new article of faith but has been there since the start.What will the media publish next Vaiskahi ? 'Sword weilding Sikhs march throught he high street serving free food to all'? No we didn't think so.

The simple demands of Sikhs and protestors to the Gurdwara Committes is to adhere to the Sikh Rehit Maryada - the code of conduct do not disrespect Sri Guru Granth Sahib Ji, the dedication of faith of devout Sikhs & the Sikh Kaum as a whole to make a bit of extra cash or to please your HSS/RSS friends who wish to use the Gurdwara for Durga Pooja.The quicker the idiot leadership of the corrupt Gurdwaras realise this the better.

**Update on Sikhs locked up in Leamington Police Station**
*Police say they were called and told '30+ men armed with spears,knves,swords and a Gun had entered the Gurdwara and that they were threatening and holding people against their will,the callers being the Anti Panthic Indian Committee members.
*This triggered armed response units and for a major incident to be declared,as it was also 9/11.

*Police say upon arrival there was a peaceful protest going and what the above phone call said was not going on.
*Police were asked why were they not giving the Kirpans back of the Sikhs being released.Police responded by saying that as allegations of threats had been made they want to keep them as evidence and once their investigation has been completed they will release the Kirpans,this is NOT a good response by the Police as no violence occured and no threats were made using Kirpans,what the Police do say is that they will make the relase of the Kirpans a 'priority',we shall see if they stick to their word.
*Police were asked if those Anti Panthic Indian Committee members who made the false calls about guns spears etc will be taken in & dealt with for wasting police time and resources,to which they said yes they will look in to this.
*Police were asked why the media were making such a huge issue and giving out misinformation,they responeded by saying the only info they gave out was on their website and don't know where the rest of the info came from,but on their own site they have said mentioned blades.
**No one has been charged so far**