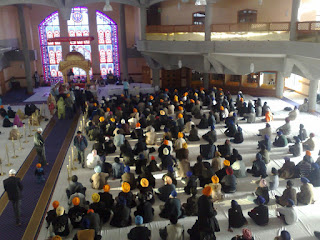 An emergency Panthic Conference was held at Sri Guru Singh Sabha Southall on the 12th of December 2009 on response to the brutal attacks on Sikhs in Ludhiana and the killing of Shaheed Bhai Darshan Singh Ji Lohara.The Conference was attended by all the Jathebandia of the FSO - Federation Of Sikh Organisations UK and other Panthic Sikh groups.Resolutions were passed,money raised for Shaheeds,and tributes paid to the injured and Shaheed Bhai Darshan Singh Ji Lohara.

Playlist of videos in the player below:

An emergency Panthic Conference was held at Sri Guru Singh Sabha Southall on the 12th of December 2009 on response to the brutal attacks on Sikhs in Ludhiana and the killing of Shaheed Bhai Darshan Singh Ji Lohara.The Conference was attended by all the Jathebandia of the FSO - Federation Of Sikh Organisations UK and other Panthic Sikh groups.Resolutions were passed,money raised for Shaheeds,and tributes paid to the injured and Shaheed Bhai Darshan Singh Ji Lohara.

*This gathering demands those accused be arressted on charges of murder and attempted murder.

*A stop and ban on the programmes of Ashutosh alongside the programmes of Gurmeet Ram Rahim,if not the Sikh Nation will have to find its own way to stop the programmes of these thugs.The Govt will be responsible for peace if they fail to shut these cult centres down.All Sikhs are asked to boycott Parkash Badal socially,politically and religiously for his anti Sikh activities.

*All Sikhs are asked to oppose & boycott Parkash Badal,BJP,Congress and any other group of figure who has tried to carry out genocide on the Sikhs or has commited any other crime against the Sikhs,this applies to Sikhs within India and outside.

*This gathering also requests the Jathedars of the Takhts,at this critical time we ask you to lead like Baba Phoola Singh Ji and stop the anti Sikh activities of Badal and co.If the Jathedars do not step up the to mark history will never forgive them and the Sikh nation will pave a new way to get what it wants.

*Today's Panthic gathering asks all Panthic hearted people who feel pain for the Sikh nation to not fight and be divided in groups,this will only lead to disaster.We ask all to understand the undercover plans anti Sikh forces have to divide us and cause us to fight.

*Today's gatheirng declares that the UK Sikh sangat will give 5 Lakh Rupees to the family of Shaheed Bhai Darshan Singh Lohara and any Sikh who has suffered being shot or has bullet wounds will be given 2 lakh rupees and any other injured Sikh 1 Lakh Rupees.

*After the Vienna incident Panjab was burned and around 500 crore damage was done to public and private property. Those who carried this out were neither beaten or shot.On the other hand on the 5th of Dec 2009 in the peaceful protest by Sikhs - Sikhs were beaten and were fired at with live ammunition,which resulted in Sikhs becoming Shaheed and serious injured,we oppose this two faced move in the strongest words.

* Akali,Congress MLA's attend Asuthosh's annual smagam gathering these people should be called to Sri Akal Takht Sahib - due to their anti Sikh activity and if these people ever come to the UK they should be questioned on their actions.

NOTE: These resolutions are endorsed by the Italy Sikh Council & affiliated Gurdwaras,Gurdwara's of France & Germany's Panthic Jathebandia/Groups These resolutions were all passed by the Sikh Nation on the 12th of December 2009 at Sri Guru Singh Sabha Southall Havelock Road.


Responding to the call of Damdami Taksal for Punjab shutdown on Dec 7, scores of activists of various organizations took out a joint procession on the streets and lanes of Amritsar to protest against the killing of Darshan Singh Lohara in Ludhiana on Dec 5. The demonstrators shouted slogans condemning the Punjab government for allowing the DJJS head Aushotosh to visit Punjab to address his followers.

It is pertinent to mention that one person was killed and 12 injured when police fired bullets on Sikhs protesting against the blasphemous activities of Nurmehal based DJJS.

Kanwar Pal Singh said the police resorted to unprovoked firing, which was a repeat of the incident of Baisakhi Day in 1978 when neo-Nirankari activists had opened fire killing 13 Sikh protesters, leading to an era of unrest in the State. “Even then Mr. Badal was the Chief Minister,” he said.

Blaming both Congress and the BJP for patronizing the self-styled godmen, he warned national political parties to desist from playing with fire.