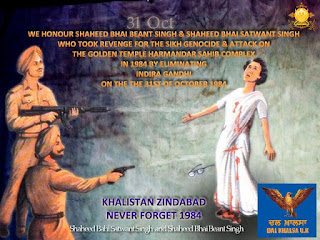 Dal Khalsa honours the two immortal warriors of the Sikh Nation who shot dead the tyrant Indira Gandhi on this day 26 years ago for her genocidal crimes against the Sikh Nation.History is witness that the Sikhs will hunt down and eliminate any tyrant who wishes to destroy and attack the Sikh Nation.

These two Sikhs took it upon themselves to take revenge for the desecration of Sri Harmandar Sahib and countless other Gurdwareh,and Beadbi of death defying proportions through which tens of thousands Sikhs were ethnically cleansed in a genocide which spanned the entire Panjab.

Indira Gandhi had plans to carpet bomb the Panjab on Sri Guru Nanak Maharajs Parkash Divas and with this plan she wanted a war with Pakistan so Sri Nankana Sahib along with Sri Harmandar Sahib and the Sikh Homeland Panjab was wiped of the face of this Earth.

The Sikhs would therefore loose their homeland in a bloody war and the Sikhs outside South Asia would be lost without a connection to a homeland leading to the destruction of Sikhism and Sikhs themselves.

The two lions Shaheed Bhai Beant Singh and Shaheed Bhai Satwant Singh upon hearing this took action and planned to eliminate the tyrant on 31st Oct 1984 less than a week before she planned this Genocide and proxy War with Pakistan.

The Pappan Evil Witch was slayed on 31st Oct 1984 and sent to hell,its our duty to remember these Shaheeds and tell each and every Sikh of their story young and old for if it wasn't for them saving the honour of our Nation ,what fate would we have faced had Indira gone ahead with her plan.......................the Delhi Genocide was just a small preview and quick attempt at salvaging the genocidal plan.